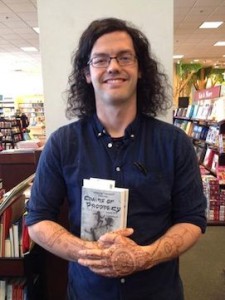 Jason P. Crawford was born in Louisiana in 1981. His writing career began in 2012, when he sat down for some “writing time” with his wife and sister-in-law. He has always been fascinated by the magic in the real world, leading him to focus most of his efforts on urban fantasy and science fiction.

So far, Jason has published four novels: Chains of Prophecy, The Drifter, Seeking the Sun, and Cycles of Destruction. His life as a husband, father, and teacher (as well as hardcore gamer) has opened up and nurtured a wealth of imagination and given Jason a tendency to flights of fancy, and those flights give rise to his work.

Time to chat with Jason!

I’m currently in editing on two: Bonds of Fate, which is the second in the Samuel Buckland Chronicles, and Dragon Princess, a Fantasy novel.

In order of publication, I’ve written Chains of Prophecy, which is the first Sam Buckland novel, The Drifter: Essentials Vol. 1, which involves demigods who represent basic concepts of reality, Seeking the Sun, a paranormal romance/urban fantasy involving Apollo, and Cycles of Destruction, a sci-fi adventure with artificial intelligences. All of these are the starts to various series…whether I intended that or not. 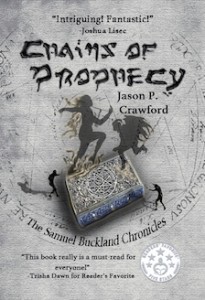 What do you think some of the greatest misconceptions about indie authors are?

That we aren’t talented enough to be “really” published. That we’re hacks who are just trying to make money off of less-than-mediocre work. That we don’t care about our finished product. I’ve read so many supremely talented independent authors since I started my own career.

I also write in order, at least for the first draft. I write organically and “follow” the characters around through whatever it is they’re doing…and that’s how I write it. When I edit, I might add scenes here and there, rather than chronologically, but the first draft is always straight through the story. 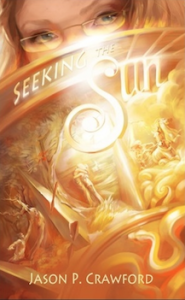 Do you have any advice for first-time authors?

Write. Write some more. Drink some water or tea or coffee and write more. Seriously, schedule some time virtually every day to write. Even if you only get a few hundred words in a day, you’ll get there!

I’ll share tiny little pieces of my work as I go through it, especially if I’ve written something I’m very proud of, but otherwise I don’t let anyone see the whole thing until I’ve edited the first draft once. It’s important that I can create the work without undue input from others at first. So, the second draft is for my beta readers.

Were you “born to write” or did you discover your passion for writing later in life?

I started writing about two and a half years ago, in September of 2012. I had done some creative writing in high school and such years before that, but had never really seriously considered writing as something I might want to do. It wasn’t until my sister-in-law suggested “writing night” that I found out how much I loved doing it. I finished the first draft of The Drifter and went right into working on another book.

First, ignore any part of it that’s a personal attack. That has nothing to do with you. Next, mine it for information you can use. Does it talk about your formatting? Check that. Spelling and grammar? Look it over again. Last, do not, I repeat, do NOT respond to a negative review, no matter how unfair it might seem. There is no faster way to tank a burgeoning writing career than to get into an “author vs. reviewer” scuffle.

Have you been involved with the Kindle Direct Program? If yes, do you believe it’s worthwhile?

All of my books are available through KDP. I absolutely believe it’s worthwhile – it’s inexpensive, easy to use, and pays a good chunk of royalties.

I have almost no control over what the characters do…at least, not in the first draft. They run the show, and I follow around and write it down. I’ve been surprised, shocked, amazed; there was a time once in The Drifter that I had to walk away from the computer for about half an hour because of something the protagonist was about to do.

A lot of authors are frustrated by readers who don’t understand how important reviews are. What would you say to a reader who doesn’t think his or her review matters?

Your reviews are a communication to other customers. You’re telling the world what this book meant to you, how you received it, what you thought of it. By speaking up, you can help steer the people who will like it towards it, while warning off those who might be wasting their time. It’s a worthwhile endeavor.

What do you know now that you wish you’d known five years ago?

I just wish I had the writing experience that I do now. My earlier books would have come more easily, more confidently, needed fewer revisions and been more powerful.

I’ve been married for over ten years and have three sons, ages 8, 5, and 2. My wife is incredibly talented and multifaceted-she’s my primary beta reader, my first editor, my cover designer-and she’s writing her own books too!

That I was in the Army for six years as a cryptologic linguist, intercepting communications. I’m not allowed to talk about the specifics for another forty-four years or so.

Any music with a story inside. I love songs from Lorenna McKennitt, Meat Loaf, anything that’s epic and has something going on with it.

What’s your favorite film of all times? Favorite book?

Oh, that’s tough. My favorite film of all time might be Watchmen, because it’s such an interesting look at superheroes and I love superheroes in all forms. Yeah, especially with the duality represented by Rorschach and Dr. Manhattan. For my favorite book…I’m very partial to the Mallorean series by David Eddings. I remember distinctly how, in high school, I would go to the library, check one of them out, then return it the next day for the next book…and when I finished the series, I’d start over again.

What are three things you think we can all do to make the world a better place?

Talk to each other more-and not just in texts and emails and Facebook messages, but actual conversations with other human beings. It reminds us that we’re all part of the same species, all the same but for a few superficial differences. Second, read more. With the hectic pace of our lives and the emphasis put on succeeding, whatever that means, reading is an escape, a way to experience something you don’t have the opportunity to experience normally. Third, create something. Be it writing, painting, poetry, carpentry, or whatever, it’s within each of us to create…but that talent, that urge, is often stifled and it expresses itself in pained, unhealthy ways at times.

Listening to Weird Al Yankovic while I write. I dance, bob, grin like a loon and draw weird looks from my writing partners.